I dropped by the Carindale Apple Store in Brisbane this afternoon for my first hands-on with an Apple Watch. As I said on Pragmatic I thought that the single most revolutionary part of the watch would be the taptic engine, and it did not disappoint. More on that in a moment. Before we go further I did not try the Edition, although it looks pretty enough behind the glass, I was only interested in trying on those model combinations I am considering for myself.

Firstly I wanted to check the relative weight of each type of watch on my wrist. I’ve worn both lighter and heavier watches in my pre-mobile (cellular) phone days and always preferred a lighter watch. Despite being 30% heavier on paper I was pleasantly surprised to find the Apple Watch didn’t feel significantly heavier when compared to the Sport Watch. I could go either way based on weight.

Next selection was the band, starting with the elastomer. The smaller of the two bands was a VERY snug fit on the outermost hole so the next size band was definately in order, but I was struck by how comfortable the White and Black bands felt. Not rubbery so much and not plastic-like either. They were comfortable however when sweaty I’d suggest they’d become slippery but that’s not something I could easily test in the air-conditioned environment of the store.

I tried all of the band combinations on the Apple Watch and most on the Sport, just to say I had. I honestly didn’t rate the Classic Buckle, nor the Modern Buckle. They felt plain and looked dull to me, so it was on to the two loops.

When trying the Leather Loop I was instantly struck by two things:

It’s probably the case that with prolonged use the Leather strap will absorb some sweat and become softer and more comfortable however first impressions were pretty negative for me. Strike out on the Leather Loop.

The real surprise was the Milanese Loop which was light, comfortable and looked stunning. I was concerned that, unlike the Leather Loop with multiple magnets for alignment, the Milanese only has a single magnet at the end which is perfectly strong to hold the band and prevent it from slipping but does not hold the overlap in alignment.

That said, it warmed up quickly to my arms temperature and felt very nice against my skin. The combination worked with either the Sport or the Watch versions though the transition was obviously nicer on the Apple Watch, which makes sense being of similar material and design.

The final band was the Link Bracelet which is the kind of dress watch I am accustomed to wearing. I actually HATE links since they regularly rip out my arm hairs as the watch flops around my wrist when I move and it’s an unnecessary unpleasantness to endure for the sake of something so pointless as fashion.

That said the Apple Link Bracelet didn’t pull a single hair despite my best efforts to make it do so. It was by far the most comforable, easy to adjust and nicest Link Bracelet I’ve ever worn and it looked very professional, especially with the Apple Watch but it is quite noticably heavy. In fact it weighed so much with the Apple Watch I immediately scrubbed it from the list. Admittedly, being the most expensive strap it had probably lost before it began.

With the aim of keeping my Apple Watch ambitions within the realm of fiscal feasability I was determined to find the 38mm size watch acceptable, however in trying them both on my wrist (38mm White Band Sport and 42mm Black Band Sport) alas the 42mm won out. The larger size and screen made a difference not only to the perceived size of the details on the screen but also the relative proportions of my wrist. 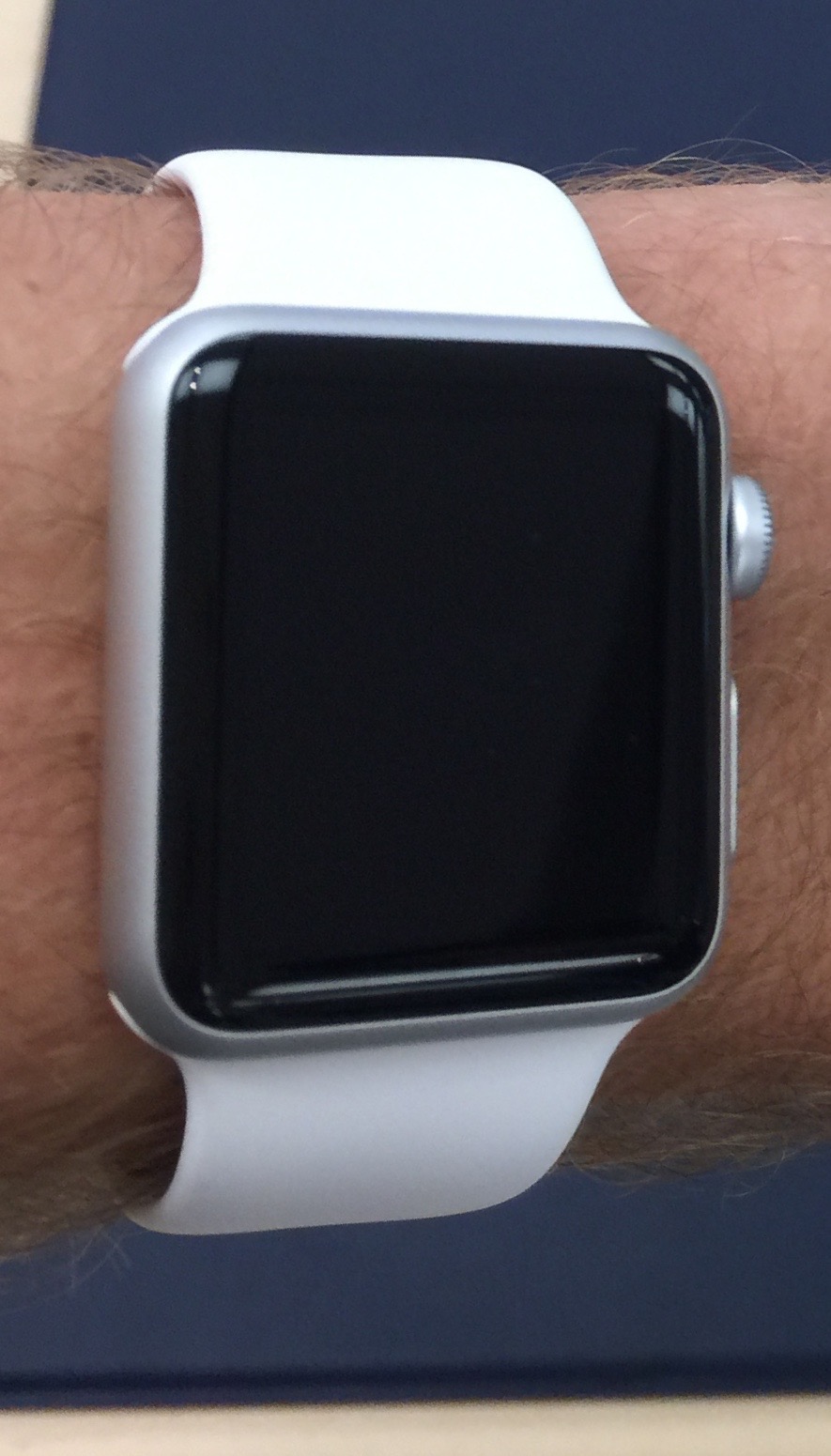 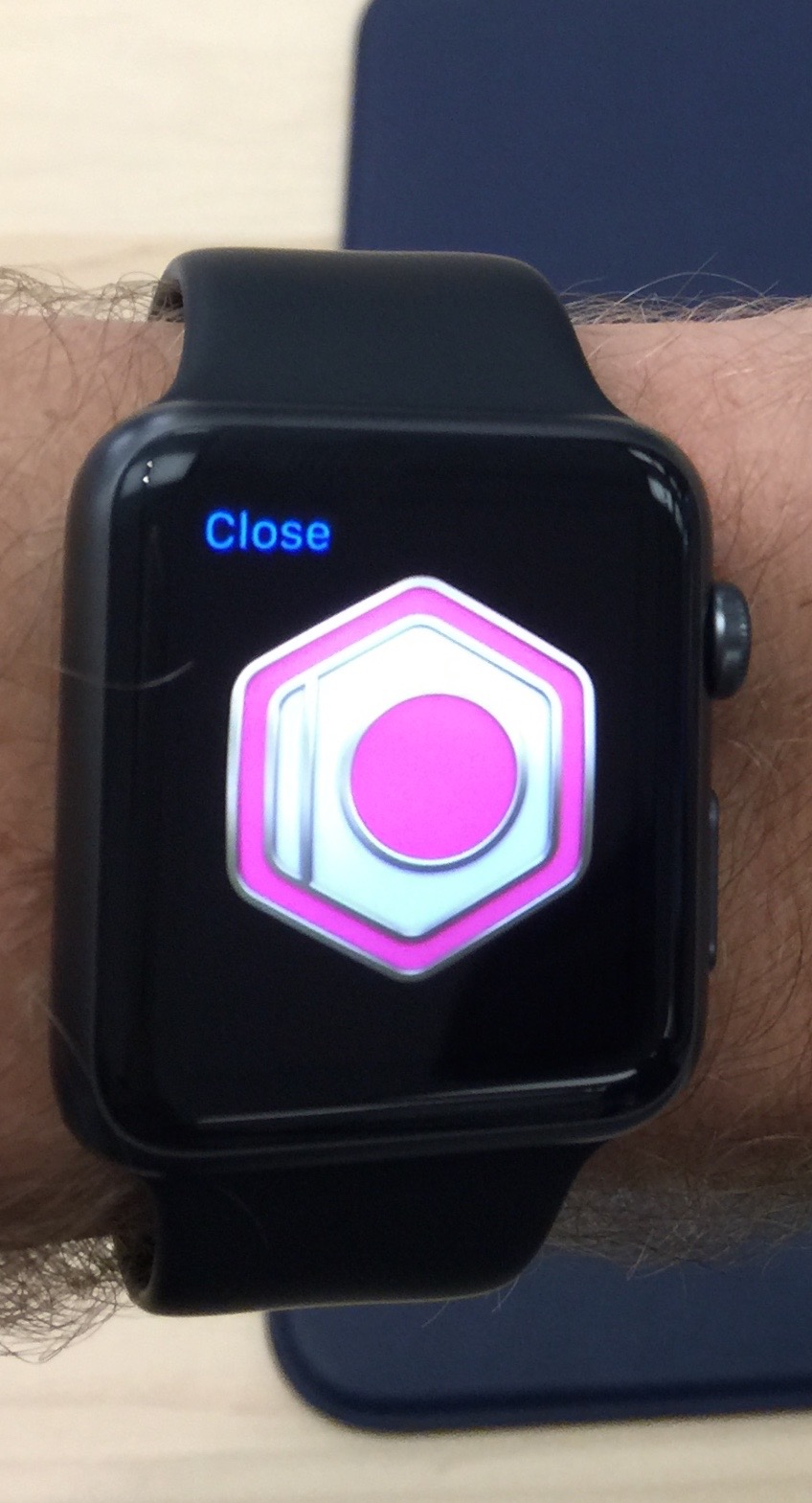 In addition the 42mm gets better battery life and in this game the Watch needs all it can get. The weight difference between the sizes was indisinguishable to me and hence I’ll shell out the extra money and go for the 42mm option when the time comes.

Two options would be my choice:

Let’s be honest though: I’m not into fasion. I see it as essentially pointless. If I get one it will be the cheaper option. The AppleCare+ option seems like a good idea with two free accident repairs over a two-year period seeming like a good investment, especially considering the exposure of the device to potential harm.

A High Price To Pay

In the end the Apple Watch does so many different things for different people and whilst I can be selfish and indulge my own use case in this discussion let’s be honest, there are so many things the watch does worse than my iPhone or iPad and yet it costs nearly as much.

For the fitness tracking and discrete notifications are the two things it does so much better but then a FitBit works just as well for the former. Hence the Taptic engine and its discreteness is the true winner for this product. I can confirm for myself now that it is VERY deliberate and distinct and in my demonstration was able to tell the difference easily between different tap strengths and patterns for different notification styles.

With John Grubers help on Twitter I was able to determine that the taptic engine is essentially silent as well (something I couldn’t test in-store due to ambient noise levels) which makes it a winner in meetings and family gatherings where you need to be subtle. 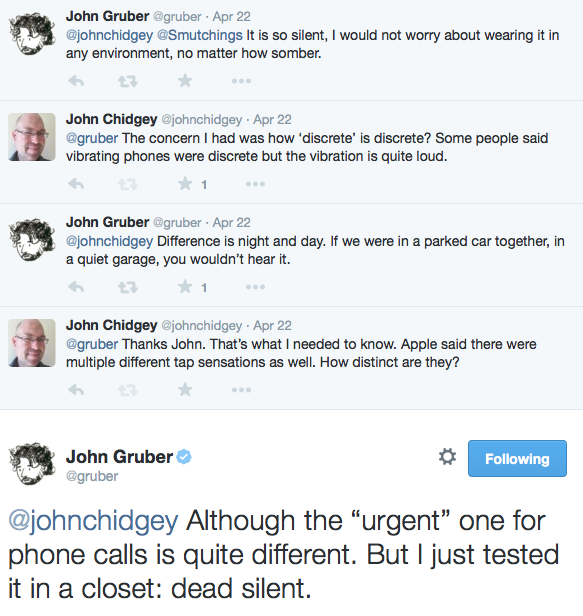 However for me that’s just the problem. Yes, it’s a leap forward in discrete notifications but it’s a very high price to pay just for that. I want one, but I want to wait and see how others find uses for this new device to see if there are genuine, additional use cases that I can derive benefit from before I take the plunge and fork out hard-earned cash.

To the many people that pre-ordered sight-unseen - you’re braver than I am. (Braver?)