Letter To Tesla Part One

Being a very happy (for the most part) Tesla Model 3 owner for over 9 months now, and with 22k on the clock I’ve finally decided it’s time to write down some areas for improvement for this amazing vehicle. These aren’t physical change suggestions or anything complicated and I have four to suggest.

I could point out things like better water resistance of the electric window components (mine have developed a squeak on raise/lower whereas my Honda Jazz is going over 8 years without a single squeak ever from any of its electric windows) or a non-bluetooth auto-unlock proximity sensor (long story) instead I’m going to focus initially on things that are simple software tweaks.

I’m certain that Tesla get a lot of these requests and I’m also sure that Elon Musk is a busy man (okay I know he is) so these many not find their way to implementation in the short term but I’ll settle for a feature that’s on a backlog list somewhere for a future update - even if it’s a few years down the road.

None of these are Rocket Science Mr Musk sir, that’s the other company you also run…where it really, actually is…

When you’re in range of cellular data (so far as I can tell) another option appears called “Stations” which is a list of FM stations that the Tesla believes it can find or that should be there based on your location. But if that’s not there, you can direct tune if you know the exact frequency you’re looking for. However under “Direct Tune” there is no way to ‘Seek’ for an FM Station as the current screen looks today: 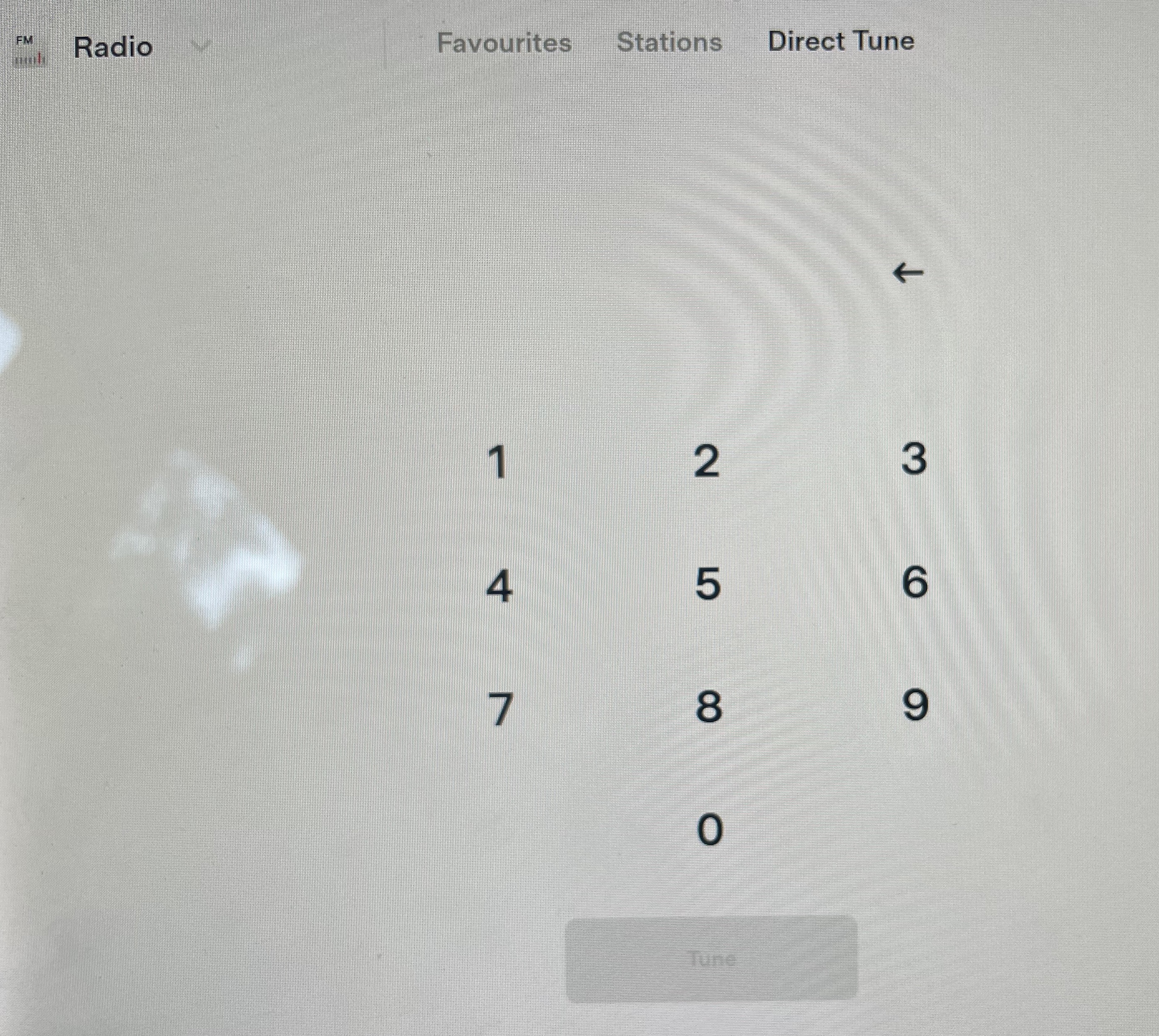 In my experience on roads only a few hours inland from Brisbane, direct entry found listenable stations on FM (minimal fade and chop) and yet they didn’t show up in a Stations List. A very simple set of seek buttons like every other digital FM Radio I’ve ever used has, would be very helpful.

REQUEST: Add a “Seek +” and a “Seek -” button on the Direct Tune FM Radio screen.

In V11 user interface, when you want to adjust the details of the Air-Conditioning, you need to tap the temperature which slides up the panel. If the A/C is currently off, this single tap automatically turns on the A/C, which more often than not is NOT what I need to do. I just want to confirm if the Recycle is open to vent for example, or to adjust the set heaters in the rear.

Pressing and holding the temperature will toggle the A/C on or off without raising the panel. Tesla added some short-cuts to the menu bar to adjust the front seat heaters and the steering wheel heater but there are still plenty of other useful functions that are contained within the main slide-up view. If the A/C is currently off it’s because I turned it off and want it to stay off.

REQUEST: Change a tap to the temperature to slide up the panel only, irrespective of whether the A/C is running or not.

The (re)addition of dimmable mirrors in mid-2020 was welcomed by Tesla drivers however there’s only one option in the menu system to enable “Auto Dim” mirrors. If enabled, the side mirrors as well as the interior rear-view mirror will dim provided the car is in Drive, the angle of the sun is 5 degrees below the horizon and the headlights are turned on. 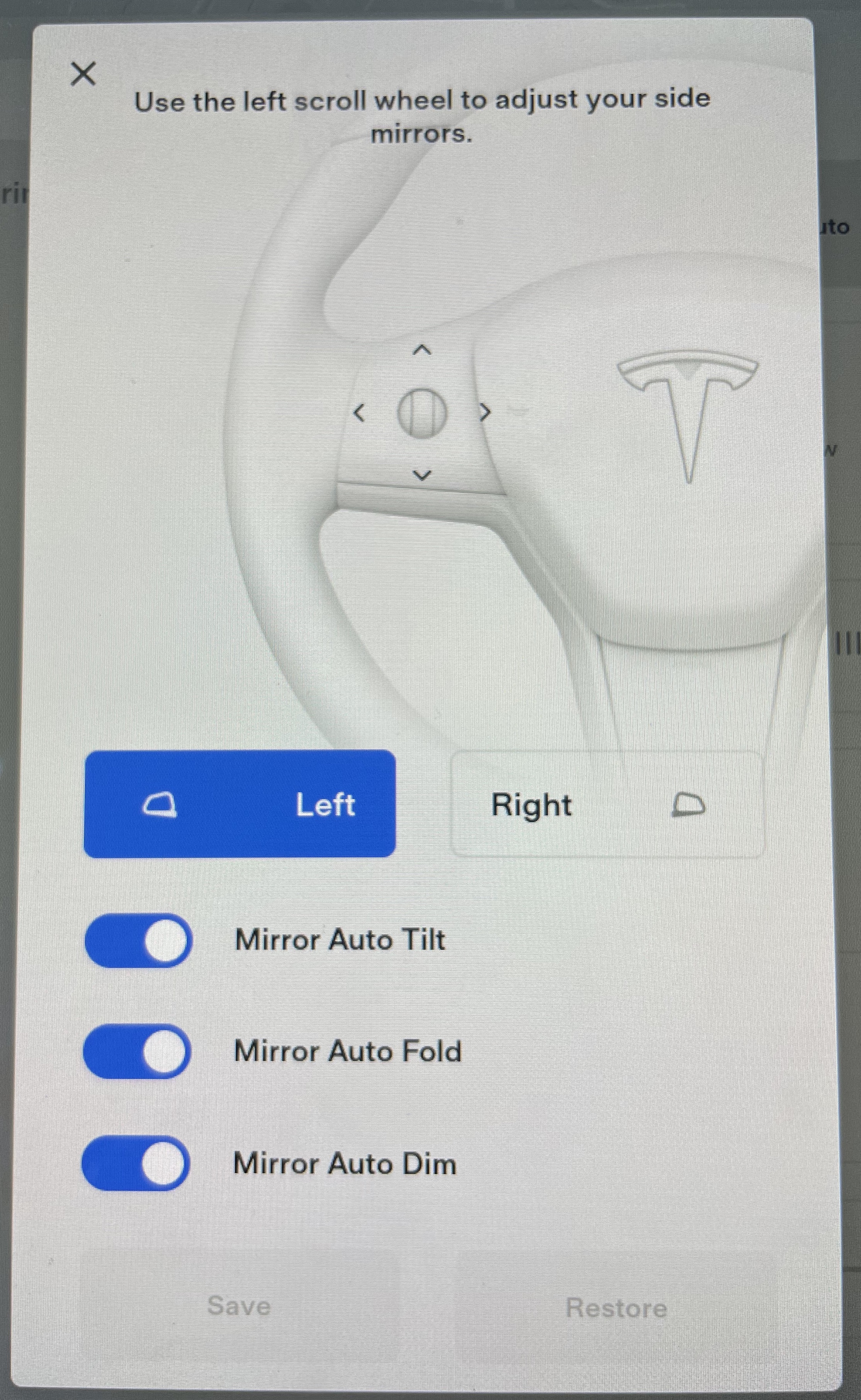 The problem with this is that many drivers turn on their lights before sunset and with its low ride height the Model 3 gets plenty of larger 4WDs blaring into your eyes 30 minutes or more before the Tesla logic will permit the dimming. In every other car I’ve ever owned, if I needed to dim the mirror I’d flip the metal/plastic toggle on the rearview mirror and instant dimming would occur.

REQUEST: Add a toggle button to turn the Dimming On and Off that’s quickly accessible.

Going up is fine, but going down isn’t, since it only drops your speed once you’ve passed the sign meaning that until the cruise-control lag slows the car down you’ve been speeding for a hundred meters or so after the speed limit dropped when you’re dropping from 100 to 80 kph for example.

The fix is simple using Newtons second law of motion. You have depth perception (and a GPS too) in a Tesla so you could calculate the distance between the current position and the upcoming speed sign change position, so figure out based on the deceleration curve when to start slowing down so you reach the speed limit when you actually pass the sign.

In Australia the police will intentionally set up speed traps in those spots trying to catch drivers out…it’s a speeding ticket waiting to happen.

REQUEST: Add a toggle in Autopilot for “Predictive Speed Reduction”

For reference I’ve written a lot of articles about my Model 3 in the past 9 months.

I’m sure there’s more, but that’s enough for now.