Many, many years ago when Fraunhofer IIS were busily refining the mp3 audio standard (late 90s), there came a brief and geek-popular music format known as the MOD-file. The concept was simple: sequence a series of very small sound bytes, stored as raw WAV (Wave) format and bundle them as a single, small file with a “track” that would play each sound at the given speed, pitch and duration. The idea started on the Amiga in the late 80s with CDs coming into existence and CD-ROMs able to dump what were then “huge” audio files (40Mb per song) onto small hard-drives, MOD files were a great way of making PC music that sounded great but took up little space and could be more easily swapped on the internet over 28.8k Dial-up Modems. They were also a far more compact method of adding musical scores into computer games of the time. I personally didn’t own an Amiga so I used either ScreamTracker or FastTracker 2 and when I started using Windows 3.11 it was the awesome Mod4Win.

Usually musicians that were composing for video games would come to “parties” where for 2-3 days they would just code/compose with an endless supply of caffeine and pizza. It must have been an incredible experience (says the inner-geek in me) but I never attended one personally. Due to their file size though I became interested in the format and working my way through the charts a song at a time I fell in love with several MODs, including one called Space Debris. ((For those paying attention Defloration was another popular MOD file that was used as the Intro/Outro music for my first podcast with Clinton Phillips called Exastential.))

The song itself was composed at the Anarchy Easter Party from the 29th to the 31st of March, 1991 (Note that the Wikipedia Entry mentions the 1990 Horizon Party - this is incorrect). Marcus “Captain” Kaarlonen composed Space Debris (at the time he was there with the Image (IMG) team) which was a MOD Tracker song that would rise to the top of the MOD Charts in coming months and years (even 23 years later it’s listed at number 17 overall most downloaded). There were several repositories each keeping their own “charts” but only the Mod Archive remains today.

The SpaceDeb.MOD file can be found here and Mod4Win is still available here and runs mostly okay on a Windows XP VM. I found the ScreamTracker video of it playing on YouTube and a screen shot on my VM. 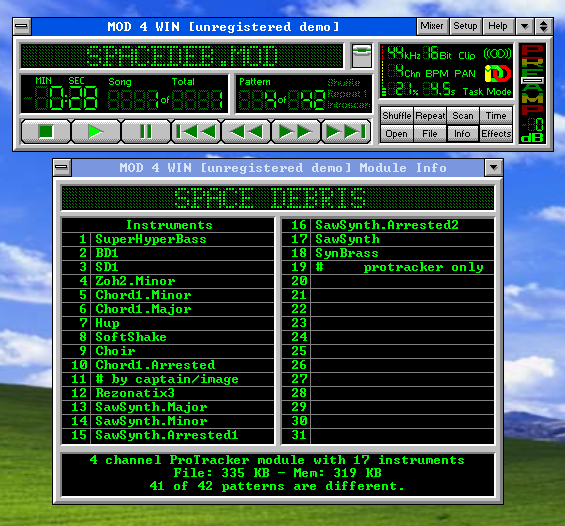 In more recent years I converted my favourite MODs into mp3 format and thought nothing more of it. It was a freely distributed song back in the day and thought briefly of attributing the file to Captain/Image (Refer Track 11 in the track list of the MOD file) but when we were putting the songs together for Pragmatic I had no idea that several sites now had the original composers details. Then I received several requests for the details of the Outro song and I stumbled upon the details I had wondered about from many years ago (see above embedded links).

However that isn’t the end of the story for this particular song. The composer is now a member of a musical group called Poets Of The Fall and they recently (2011) did the score for a cross-platform game called Rochard. “Captain” decided to update his old tune from two decades prior but with modern instruments and the result is spectacular! Unfortunately with the POTF website digital store doesn’t stock downloadable music so the only place I can find the music for sale is bundled with the game through the Steam store. Space Debris the Remix is Track number 9.

I attempted to contact Markus however for whatever reason did not receive much of a response. At this time Pragmatic continues to use the MOD Tracker version of Space Debris as the Outro music except that now I know the man who wrote it, and if you like his music then you should look into his other work.