I’ve been enjoying my 2013 Mac Pro immensely and wrote about it here seven months ago, and two months ago I upgraded the SSD, with the further thought that someday:

Today I did exactly that, although I’m not normally drawn-in by Boxing Day sales that start the week before Christmas Day and end on the last day of December (that’s not a “Day” kids…that’s two weeks…SIGH) but I fell for the deal and spent $321AUD on the RAM I had intended from Day 1 when I bought the secondhand Mac Pro.

I’d done my research (IKR…me?) and it turns out that due to the fact that the Mac Pro 2013 was designed and released before 32GB SDRAM DIMMs were available, whilst you can fit 32GB modules in the Mac Pro, if you do the bus speed clocks down from 1866MHz to 1333MHz due to bandwidth limits on the memory bus. The chances I’m going to push beyond the 64GB RAM mark in my use cases is zilch hence I have no intention of sacrificing speed for space and went with the maximum speed 64GB.

Shutting down and powering off, unlocking the cover and lifting it off reveals the RAM waiting to be upgraded: 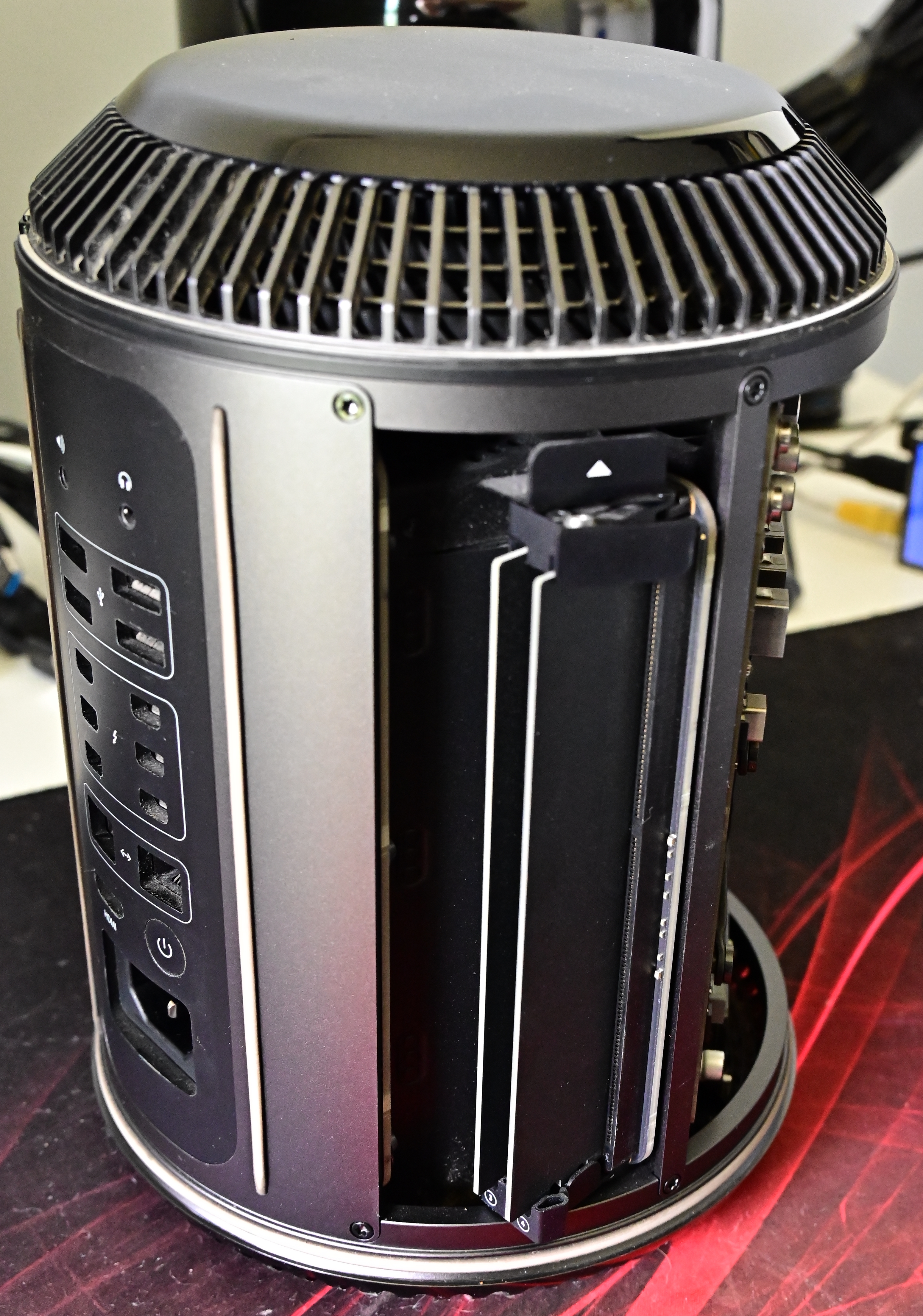 Depressing the release tab at the top of each bank of two RAM modules was quite easy and OWC’s suggested spudger wasn’t necessary. The new RAM is ready to be opened and installed: 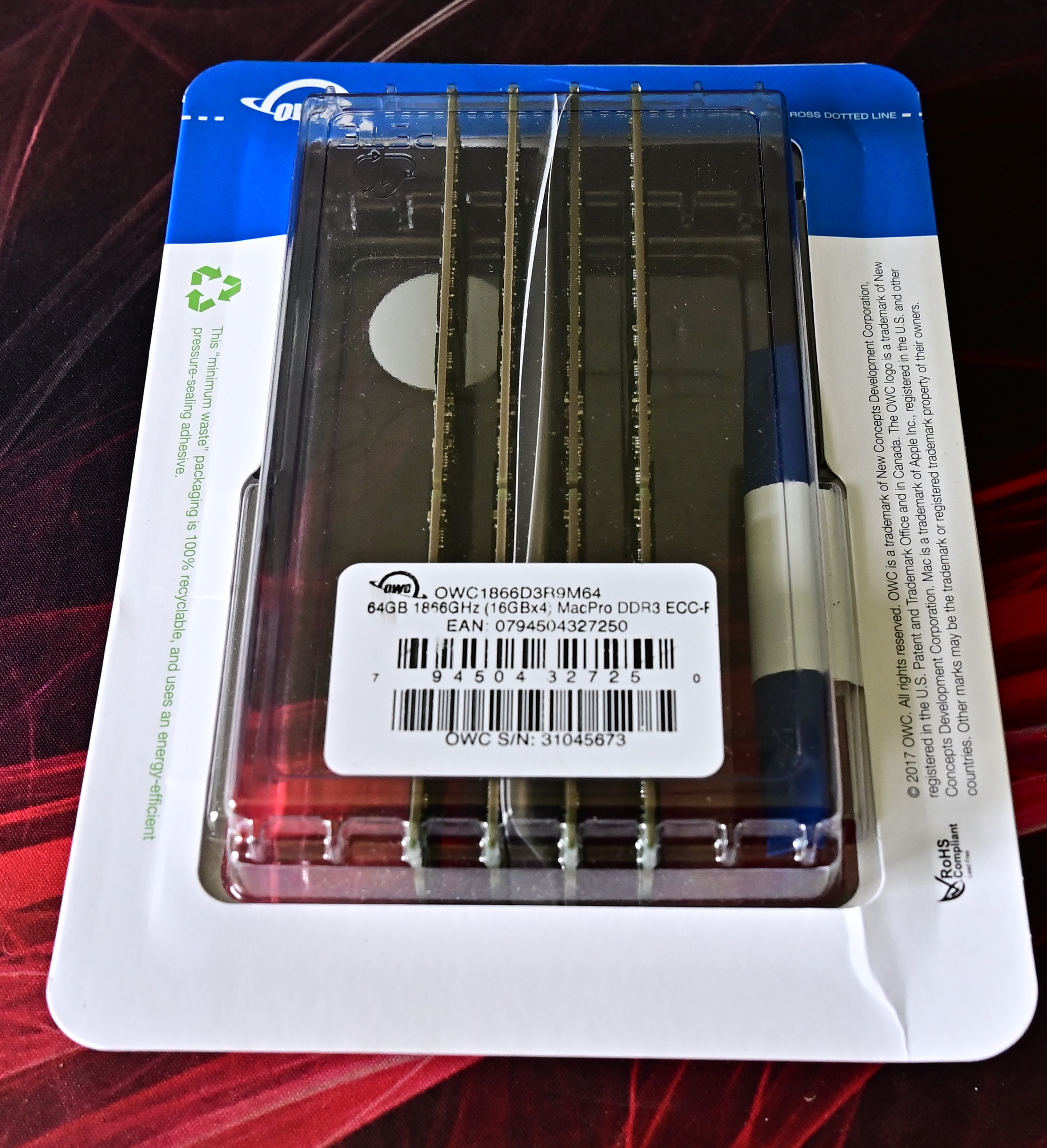 Taking out the RAM was a bit awkward but with a bit of wriggling it came loose okay. I put the old modules in the Top of the packaging, leaving the new modules still in the Bottom of the packaging: 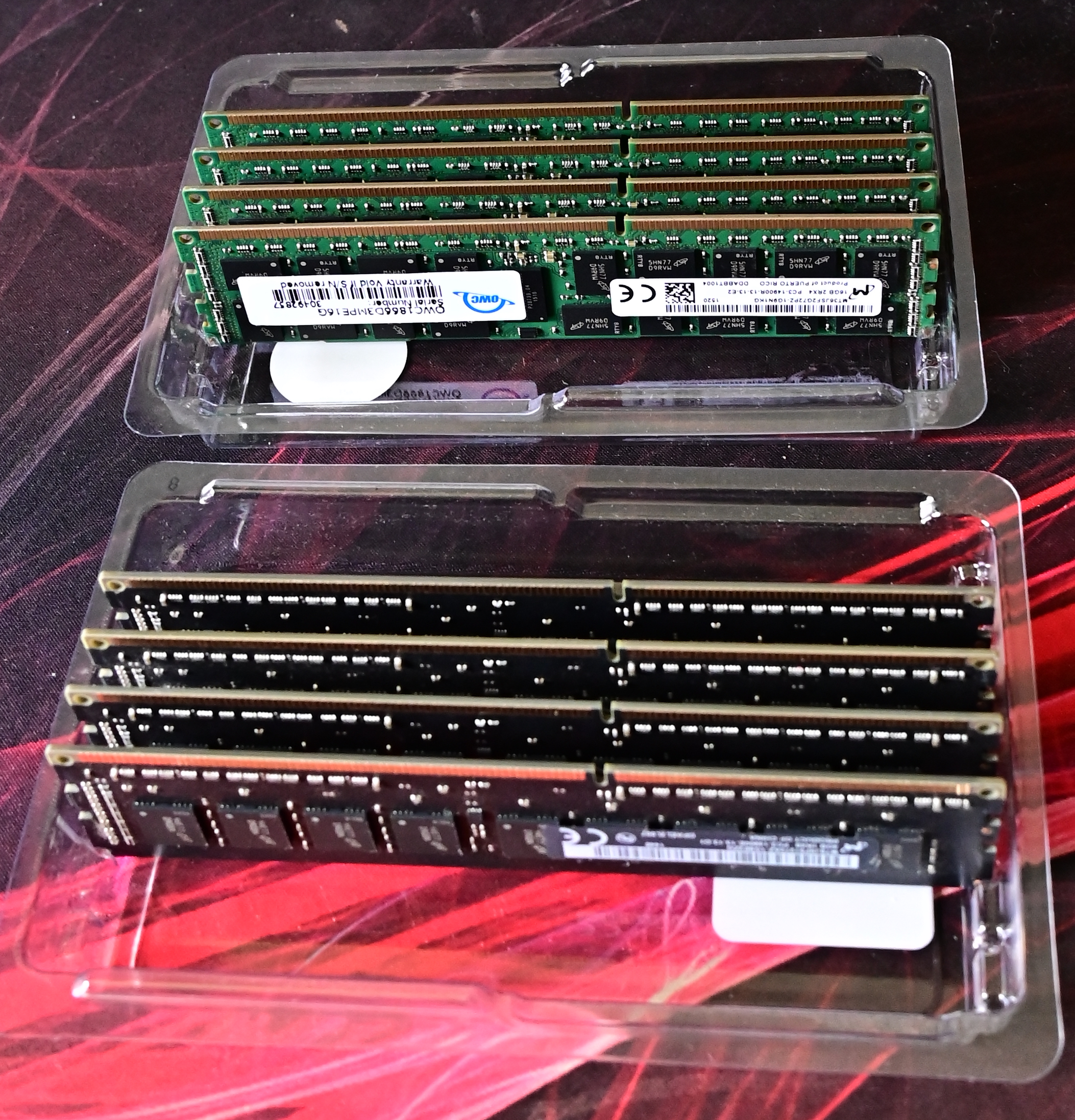 Fitting the RAM felt a bit strange as too much pressure on insertion starts to close the pivot/lever point of the RAM “sled”. Wasn’t too hard though and here it is now installed ready to be powered on: 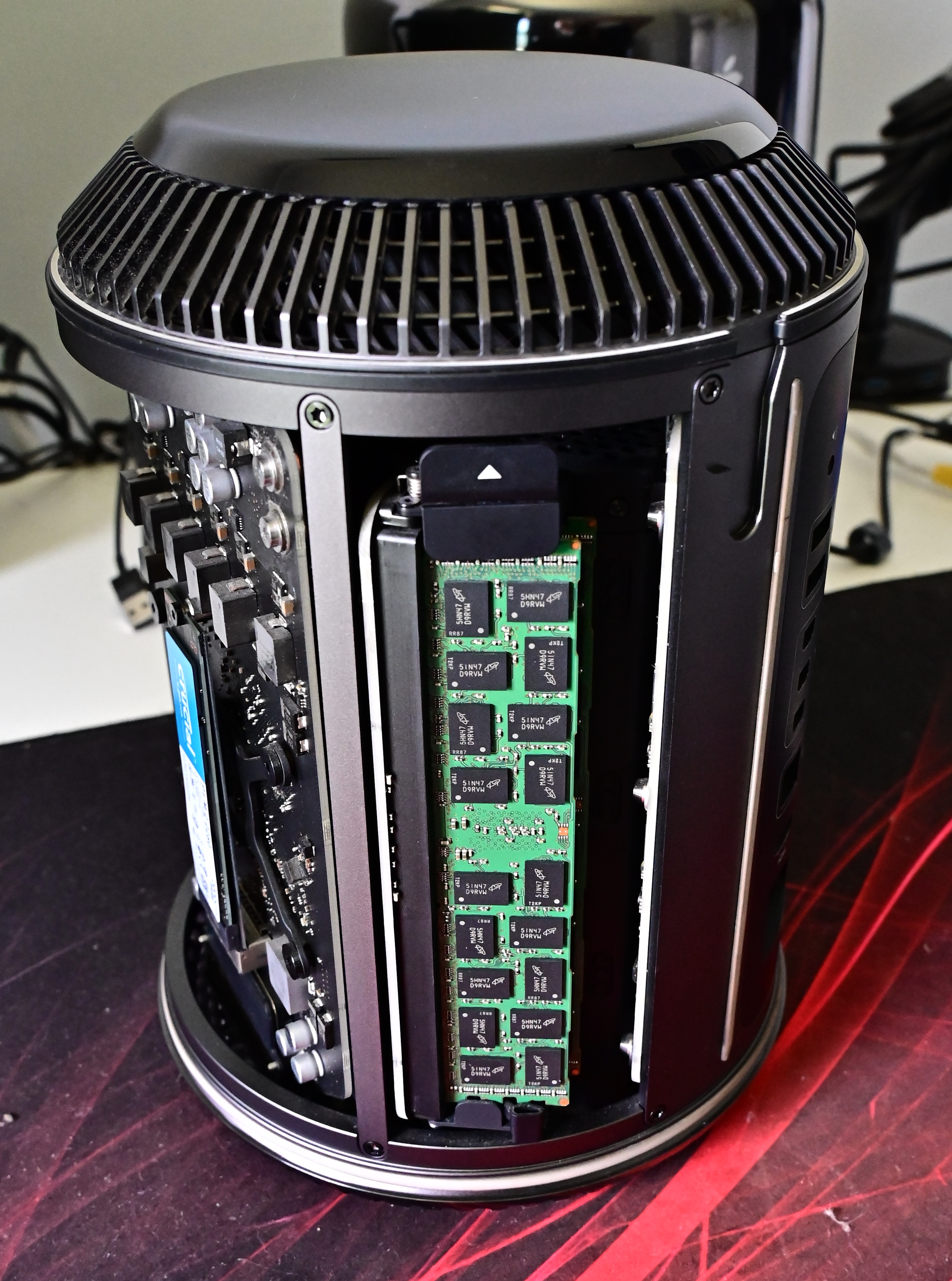 Once we’ve booted back up again I confirmed that the system now recognised the new RAM: 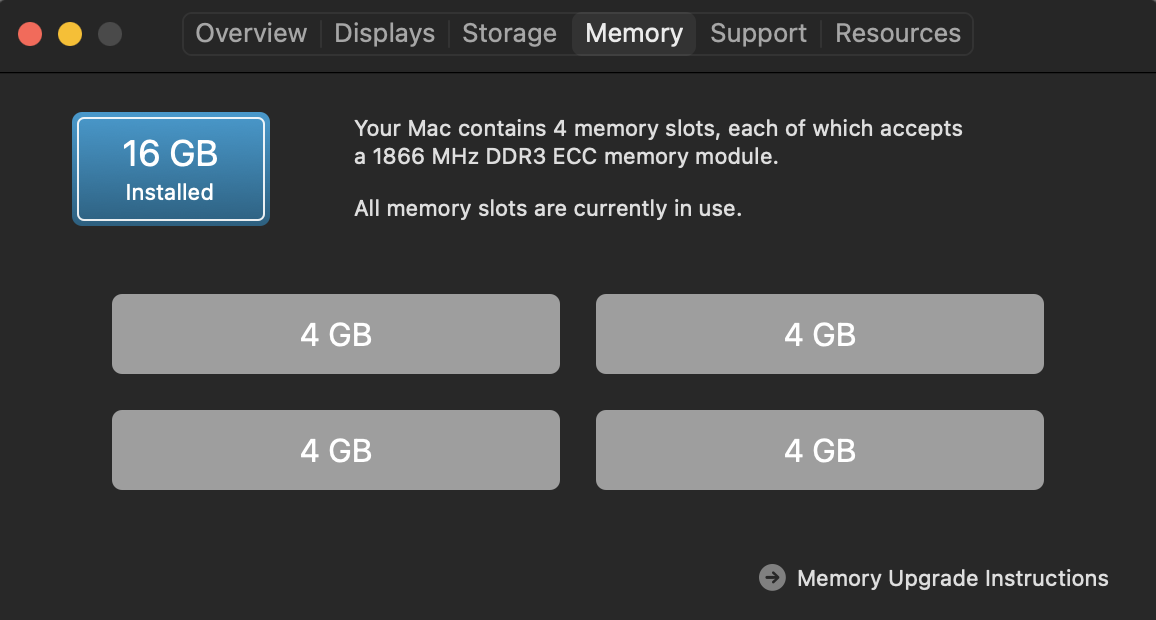 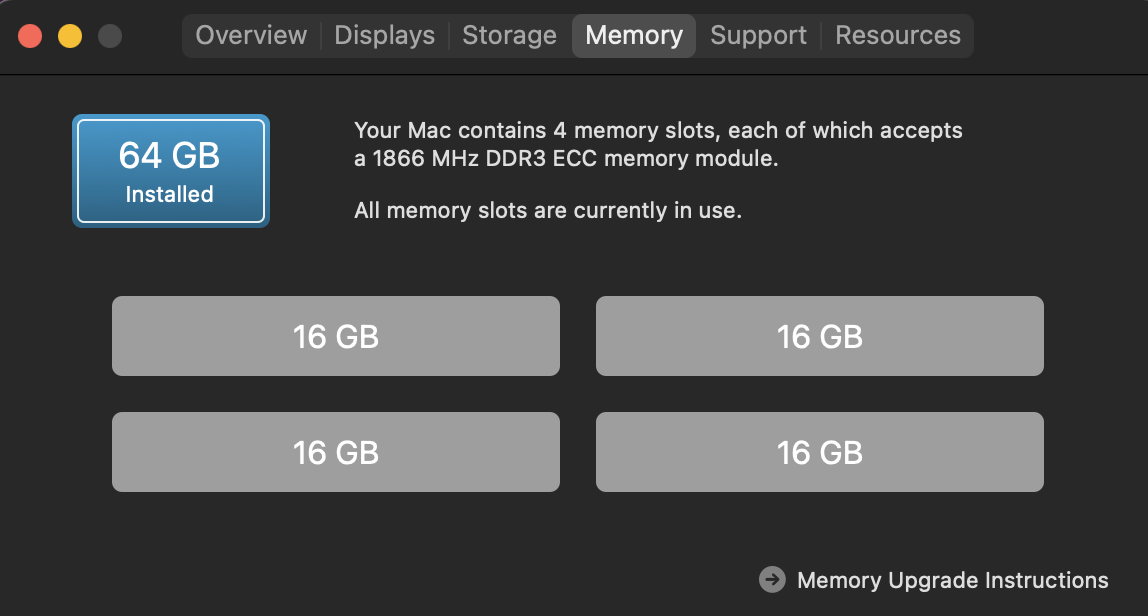 The improvement in performance was quite obvious. I run several Alpine VMs headless for various tasks as well as have multiple Email clients open, five different messaging applications (that’s getting out of hand world at large…please stop…) between home and work needs as well as browsers with lots of tabs open. Unlike with 16GB RAM, once the applications were launched, they stayed in RAM and nothing slowed down at all! It’s just as quick with 20 windows open as it is with 1 open. The RAM Profiler demonstrates the huge difference: 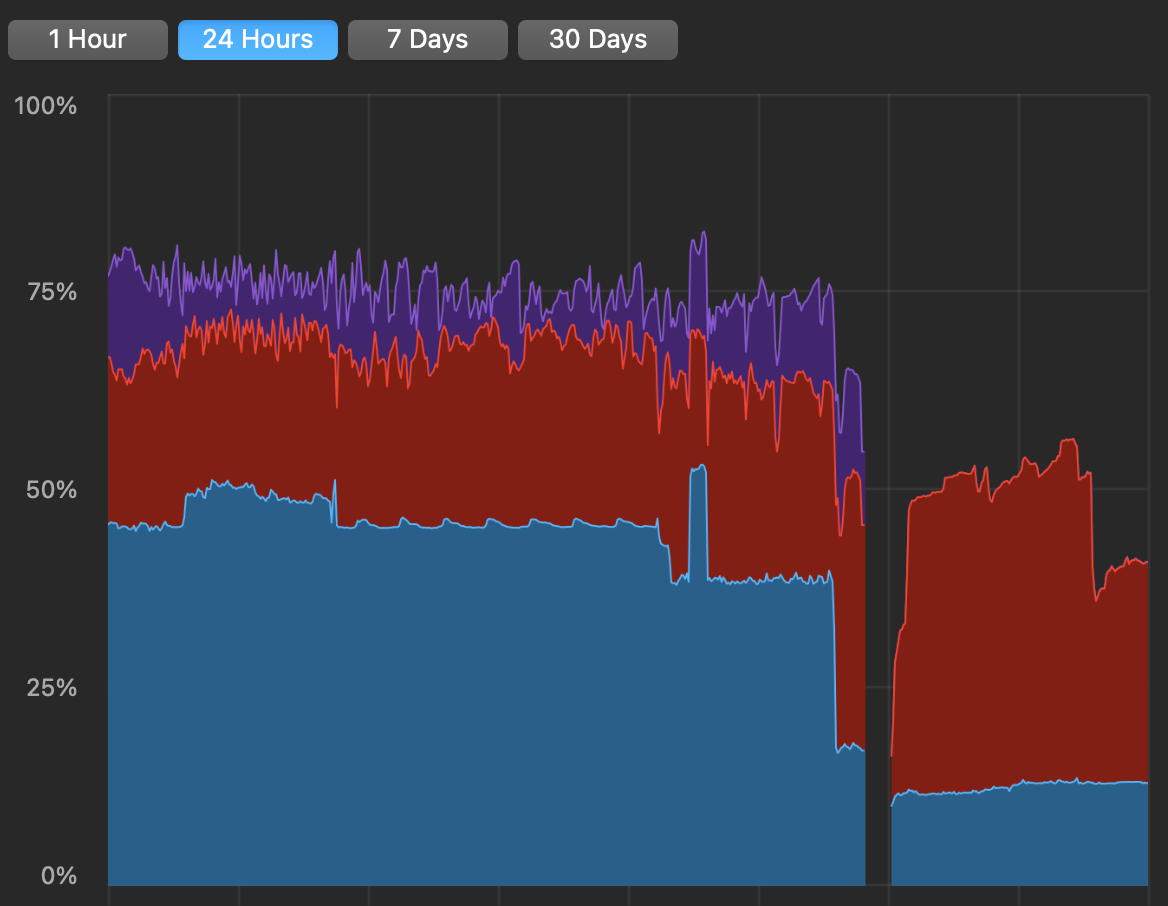 The Purple shaded area is compressed memory, with Red Active and Blue Wired and clearly the vertical scale is a Percentage of maximum therefore the system was peaking at 80% of 16GB (13GB used), but now is peaking at maybe 60% of 64GB (38GB used), with no compression at all. The swap was peaking during 4K video encoding at 15GB which was insane, but now it has yet to pass 0GB.

In summary it’s an upgrade I’ve long wanted to do as I was aware I was pushing this Mac Pro too far with concurrent applications and performance was taking the rather obvious hit as a result. Now I have lots of memory and the Mac Pro is performing better than it ever has. All that’s left is to upgrade the CPU…

« Buying A Tesla My Cars Through Time »